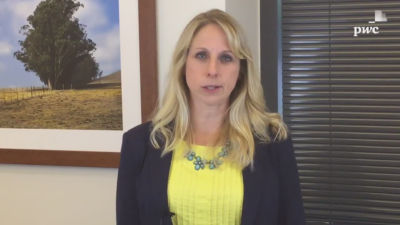 Duration: 6:05
Under the new leases guidance, variable lease payments can impact both lease measurement and classification for a lessee. Therefore, it is important to understand what variable lease payments are, which of these payments are included when measuring and classifying a lease, and how to account for changes in these payments.
Transcript
Hi! I'm Suzanne Stephani, a Director in PwC's national office.
Today, we’re continuing our leases video series with a discussion on variable lease payments. These payments will impact lease measurement and classification for a lessee under the new leases guidance.
A lease liability and a right-of-use asset will be recorded on the lessee’s balance sheet for virtually all of its leases.
In this video I’ll cover:
So to start, what are variable lease payments?
They're any payments made for the right to use an asset that vary because of changes in facts or circumstances occurring after the commencement date, other than for the passage of time.
Variable lease payments are broken down into two categories.
The first category is payments that change based on an index or a rate, such as the consumer price index, or "CPI", or a benchmark interest rate, such as LIBOR.
The second category is all other changes, such as factors based on usage or performance.
The second category includes payments based on the use of the leased asset, such as payments based on excess mileage under a car lease. Or payments based on performance, for example, when a company has to pay the lessor a percentage of its sales in a retail store lease.
Only the first category, that is, variable lease payments based on an index or a rate, are included when measuring and classifying a lease.
So how does a company include a payment that’s going to change over time when it doesn’t know the actual amount that will be paid over the lease term?
Well, the company should use the index or rate at lease commencement for all of the payments throughout the lease term.
Any subsequent change from the original index or rate would be treated as variable lease expense.
The lease liability should NOT be remeasured when the index or rate changes. The only time that it would be updated is when the lease liability is remeasured. For example, if there was a contract modification that’s not accounted for as a separate contract or a change in the assessment of lease term.
Let’s illustrate this by walking through an operating lease example:
So what happens when the lease payment changes in year 2?
For more information, please refer to the Leases page on CFOdirect.com. Thank you.