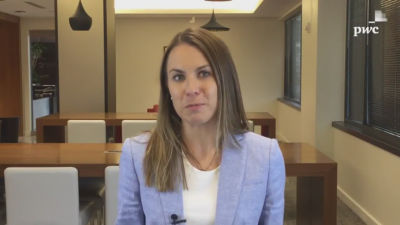 Duration: 6:05
Transcript
Hi, I'm Jillian Pearce, a senior manager in PwC's National Office.
Upon adoption of the new leases standard, companies will bring virtually all leases onto the balance sheet. The lease term is one of the key inputs that can impact the classification and measurement of a lease. Identifying the lease term may not always be as simple as it seems, and getting this wrong could have a significant impact on a company's accounting.
In this video, I'll discuss some key considerations for determining the term of a lease and the relationship between the lease term and the short term lease exception that is available for lessees.
To determine the lease term, first, start with the non-cancelable period of the lease.
Then, add any renewal option periods for renewals the lessee is reasonably certain of exercising.
Third, add any periods covered by a termination option if the lessee is reasonably certain it will NOT exercise that option.
Fourth add any periods from an option to extend (or not terminate) the lease that are controlled by the lessor.
The sum of these four items equals the lease term.
Determining the lease term sounds relatively simple, but there are some nuances.
For example, you may have noticed that the treatment of renewal and termination options depends on whether the lessee is reasonably certain to exercise the option.
So that begs the question, what exactly does "reasonably certain" mean?
The good news is that the concept of "reasonably certain" in the new leases guidance is the same as "reasonably assured" in the current guidance.
The determination of whether exercise of an option is reasonably certain is based on factors at the lease commencement date that would create an economic incentive for the lessee either to exercise or to not exercise the option.
Examples of factors that could create economic incentives include:
Lessees should consider all factors together to determine whether exercise of an option is reasonably certain.
Evaluating renewal and termination options requires judgment, but it is a key step in determining the lease term. This judgment is critically important to assessing lease classification and measurement.
The lease term also determines whether a lease qualifies for the short term lease exception, which could provide relief to lessees upon adoption of the new standard.
The new leases guidance provides a short term lease exception in which lessees may elect to NOT apply the new recognition guidance for short term leases. This election should be made by class of underlying asset, so, for example, leases of office space or leases of office equipment.
If a lessee chooses to elect the short term lease exception, it would NOT recognize a right of use asset or lease liability on its balance sheet and instead would recognize the lease payments as an expense on a straight-line basis over the lease term, consistent with the current leases guidance.
So, exactly what qualifies as a "short term lease"?
As defined in the new guidance, a short term lease is a lease that, at the commencement date, has a lease term of 12 months or less and does NOT include an option to purchase the underlying asset that the lessee is reasonably certain to exercise.
Let's highlight two points in the definition.
First, the evaluation of whether a lease qualifies as short term is based on the contractual lease term at the commencement date. This evaluation is NOT based on the remaining lease term at the time a lessee adopts the new leases guidance.
The second point to highlight is that to qualify for this exception, the lease term must be 12 months or less. We believe that this definition should be applied strictly and should consider the impacts of renewal and termination options.
Let's take an example. Consider a 5 year lease that commenced on January 1, 2015 and has no purchase or renewal options. The lessee will adopt the new leases guidance on January 1, 2019, at which point the remaining term is 12 months. Since the original term of the lease at the commencement date was 5 years, this lease would NOT qualify for the short term lease exception.
So, in summary, it's critical to understand and evaluate all provisions in each lease agreement. Small changes can impact if a lease qualifies as a short term lease, which may affect a lessee's accounting for the arrangement.
The effective date of the new leases standard is quickly approaching. As companies prepare to apply the new guidance to their lease portfolios, they will be making many judgments that will impact the classification and measurement of right of use assets and lease liabilities. Determining the lease term, and identifying leases that qualify for the short term lease exception, are just a couple of these judgments. The good news is there are many resources available to help think through all aspects of the new leases guidance.
For more information, please refer to the Leases page on CFOdirect.com.
Thank you and good luck!