Publication date: 17 Aug 2018
us Video
Watch our video on how lessees should account for operating leases
The effective date of the new leases standard for public companies is rapidly approaching. The new standard is expected to have a significant impact on lessees given the requirement that almost all leases will be on the lessee's balance sheet going forward. This video covers how a lessee calculates the initial lease liability and right of use asset, and subsequent accounting for an operating lease. For information on how to account for a finance lease subsequent to initial recognition, see the companion lessee finance lease video. 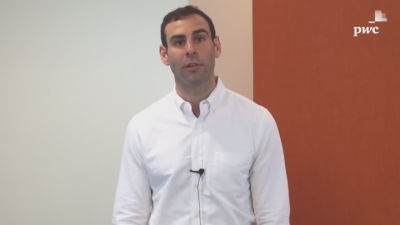 Duration: 6:18
Transcript Hello! I'm Jordan Adelson, a senior manager in PwC's national office. As a part of our leasing video series, I'm going to discuss how lessees would record;
For a description of how a lessee would record day two accounting for a finance lease…please refer to the lessee finance lease video in our leasing series on CFOdirect.com
For context, day 1 accounting refers to the initial recording of the lease at commencement, while day 2 refers to the accounting for the lease after it is initially recorded.
Let's begin with an example. Assume the following terms of the lease:
First, let's discuss how to calculate the lease liability. This amount is determined by adding the remaining lease payments at lease commencement and discounting them back using the IBR.  In this example, the remaining lease payments at commencement are 4.4 million dollars, as the first year’s rent was prepaid. When discounted back at a 5% IBR, this yields a lease liability of 3.9 million dollars.
Next let's determine the amount of the right of use asset. The starting point in determining the amount of the right of use asset is the lease liability. The lease liability is then increased for any lease payments made to the lessor at or before the commencement date and any initial direct costs incurred by the lessee. That amount would be reduced by any lease incentives received. In this example, since the lessee paid the first year’s rent of 1.1 million dollars at lease commencement, this would be added to the lease liability. Further, as the lessee was provided a 100,000 dollar lease incentive, this should be subtracted from the amount. This results in a day 1 right of use asset of 4.9 million dollars. That is, the lease liability of 3.9 million dollars, plus the 1.1 million dollars paid at lease commencement, or 5 million dollars, less the 100 thousand dollar lease incentive.
Now that we have determined the amounts of the lease liability and the right of use asset, let's record the day 1 journal entry.  Under both an operating and finance lease, the day 1 entry would be the same. At lease commencement, the entry would be:
Now that we have recorded the day 1 entry, let’s walk through the day 2 accounting for an operating lease. For illustrative purposes we have assumed that the company accounts for the lease on an annual basis.
First, let's calculate the amount of interest, which is a key input into determining the amortization of the lease liability. Interest is measured using the effective interest method. In this example, we would multiply the day 1 lease liability by the 5% IBR. This results in interest of 195,000 dollars. Now, the lease liability amortization is calculated as the difference between the lease payment, and the interest accrued under the lease. So in this example, the company has an annual payment at the end of year 1 of 1.1 million dollars, less the amount of interest of 195,000 dollars, resulting in amortization of the lease liability of 905,000 dollars.
Next, let’s calculate the lease expense, which is determined on a straight line basis.  As such, a company would divide the total net payments due over the term of the lease by the lease term. In this example, the aggregate of the annual payments of 1.1 million dollars is 5.5 million dollars. This amount, net of lease incentives of 100,000 dollars, or 5.4 million dollars, is divided by 5, the lease term. This results in an annual lease expense of 1,080,000 dollars.
It is interesting to note that the total expense under the operating lease of 1,080,000 dollars is less than the 1,175,000 dollars recognized in the first year of the finance lease assuming the same fact pattern. Although total expense over the entire lease term will be the same for both operating and finance leases, the use of the straight-line method for an operating lease results in a consistent amount of lease expense recognized each year. In contrast, the amount calculated under the finance lease results in a front-loaded expense recognition pattern because of interest.
Finally, the change in accumulated amortization of the right-of-use asset is calculated as the difference between the straight-line lease expense of 1,080,000 dollars and the calculation of interest on the lease liability of 195,000 dollars. This results in a change in accumulated amortization of 885,000 dollars.
Now let's put the pieces together and see the day 2 annual journal entry…
So let's wrap up. With the effective date of the new leases standard quickly approaching, companies have a lot of work ahead of them getting ready for the new guidance. But the good news is there are many resources available to help. For more information, please refer to the Leases page on CFOdirect.com. Thank you.

Video – Leasing - How lessees should account for operating leases